There are some good news concerning medical overcharging in Luxembourg, namely, the Court of Justice Civil Service Tribunal in its ruling of 30/04/2019 No T 737/17, Francis Wattiau against the European Parliament,  clearly stated one more time that it is illegal to discriminate against officials of the European Union by applying a higher tariff for medical care than that applied by those covered by a national insurance regimes.

In our view, this means that current provisions of the 1996 Commission Convention with the Luxembourg Federation of Hospitals are illegal and this Convention should be terminated immediately.

Currently, the DG HR is negotiating with the Luxembourgish authorities on several issues: to provide hospital outpatient services  at the same price as those provided by doctors in their practices, to  abandon the  daily hospital charge (“forfait hospitalier”) at least for outpatient care and to find a fairer and more justified basis for calculation of costs of hospital services.

After intervention of the DG HR, the PMO finally obtained certain data on how the hospitals calculate their costs, but the technical negotiations are going slowly. For the Luxembourg Federation of Hospitals, the PMO counterpart, the issue is less urgent than for our insurance regime and for our colleagues already unlucky enough to end up in hospital.

The Sickness Fund Management Committee (CGAM) has already several times discussed asking the Luxembourg government to recognize our Joint Sickness Insurance Scheme (JSIS) as a public and not a private system based on the precedence with the Netherlands where this recognition was already obtained from the responsible Ministry following a letter from Commissioner Oettinger in March 2018. The technical negotiations there still continue but the precedent itself is already created.

Solidarité européenne/R&D Luxembourg will therefore write to Commissioner Oettinger asking him to address a similar letter to the Luxembourg government asking for such recognition and demanding the new legal base for calculation of hospital services based on non-discrimination. Not only the Convention with hospitals mentioned above should be terminated, but also a new legal basis for fair pricing of medical cost should be created.  The unfair pricing practice which has been going on for more than 20 years in Luxembourg must be terminated.

We will be following this issue very carefully and will keep you informed. 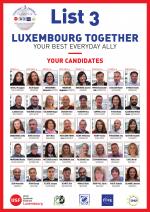 Note for the attention of Mr Günter OETTINGER,

Commissioner in charge of Budget and Human Resources

Recruiting and retaining staff in Luxembourg has become a major problem for all European institutions in Luxembourg. This is mainly due to the high cost of living here in comparison to Brussels. [ ... ]

Darkness Into Light is an international charity walk aimed at taking away the stigma surrounding suicide and self-harm as well as raising funds for charities working in this area. Suicide among young people in the EU is particularly concerning – in 2014, it accounted for around 20% of deaths in young [ ... ]

Today the Administration published the list of those lucky members of staff proposed for promotion. This list was drawn up by your Director-General after consultation with staff representation. Although we provide input with the aim of making the process as fair as possible, we can only base our comments [ ... ]